Are you in search of a cool, evergreen place to rest? Then I got a perfect suggestion for you – Gabala city.

Gabala, which is located about 225 km away from the capital city of Azerbaijan, is a perfect place for rest and tourism. The weather here is mild in spring and autumn, hot in summer and cold in winter. In addition to marvelous weather, Gabala suggests gorgeous historical monuments, which emerge all around the city and its vicinity.

The city during six centuries served as the capital of the ancient state of Caucasian Albania. Archeological investigations give an evidence that Gabala functioned as the capital of Albania as early as 4th century BC. The ruins of the ancient town are situated in 15 km south-west of the modern site of Gabala where you can stay at Qebelede gunluk kiraye evler, in the village of Chukhur Gabala on the territory between Garachay and Jourluchay rivers. Here you can find the ancient walls and towers.

The fact that Gabala was located in the middle of the 2,500-year-old Silk Road turned the city in a popular and important hub between Europe and Asia. That’s why Gabala has been always desired by many foreign rulers.

Thus, in the 60s BC, Roman troops attacked Caucasian Albania, but did not succeed in capturing the Qabala territory due to the mightiness of that ancient state of Azerbaijan. Gabala then was occupied by Shirvanshah Fariburz, King David IV of Georgia in 1120, Mongol khan Timurleng in 1386, Safavid shah Tahmasib I in 1538, Persian Nader Shah in 1734, but despite all the captures, this ancient city was able to preserve its culture and identity.

Due to its historical importance, Gabala preserved a number of fascinating landmarks. The most outstanding of them are an old tower of defense purposes (9-11th centuries), a mosque of the 13th century, Imam Baba mausoleum (18-19th centuries), Juma mosque and, surely, Historical Ethnography Museum that involves thousands of historical artifacts of the city.

By the way, a stunning news came recently from an ancient settlement Galayeri in Gabala. Thousands of artifacts made of clay, stones, metal, and bones have been found at the site, which has a history dating back to the first half of the 4th millennium BC.

Another interesting fact has been the discovery of an ancient catacomb at the site, which dates back to the same period when the site was first settled – some 6,000 years ago. So, it is more ancient than any other catacomb found in Europe and the Caucasus! Moreover, archaeologists also discovered a human skeleton buried with more than a hundred jewelries and 30 potteries in the Dizakhli village of Gabala. 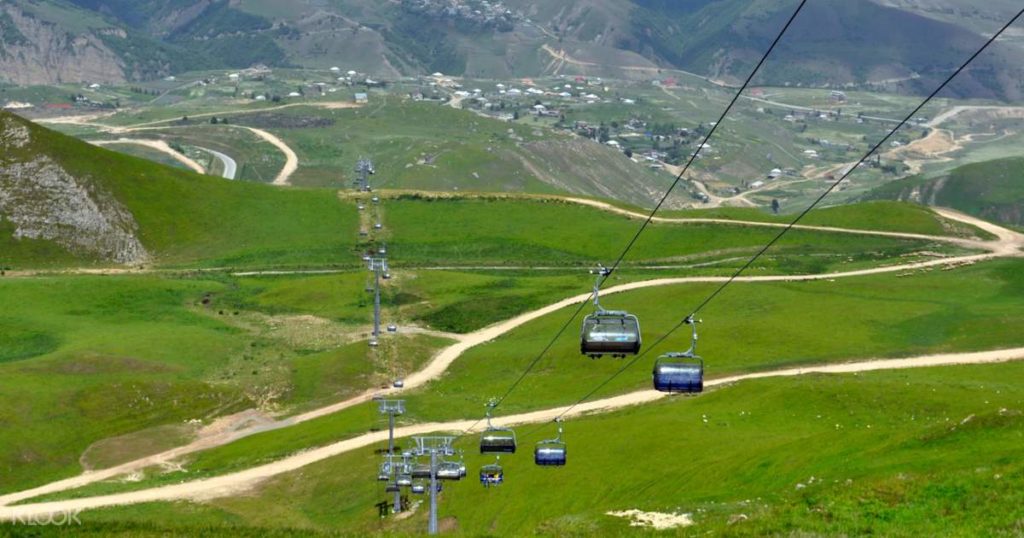 Just like in past, today Gabala is a magnet for international and local events. It can be said that the city is the second popular destination of Azerbaijan after capital Baku. Numerous meetings of politicians and summits are held in this wonderful city. In 2013, Gabala was declared the Cultural Capital of the Commonwealth of Independent States, in recognition of its long contribution to the history of Azerbaijan and the region. And today Gabala justifies its high title.

If you are a music lover, you should come to Gabala – in recent years the city has become the music capital of Azerbaijan. Annual International Music Festival – the festival of classical music is held here every summer starting from 2009, where musicians perform in the open air. Its participants are musicians from Europe, the U.S., Israel, as well as musicians from republics of the former USSR. Additionally, the contest of young pianists, jazz and mugham evenings are held in the framework of the musical festival.

Since 2013, Gabala annually hosts International Jam Festivals. And it is not too late to get in the festival of current year, which will be held in Gabala on August 27. Masters from Turkey, Russia, Iran, China, Ghana, Northern Cyprus, Ukraine and Uzbekistan, confectioners from 26 regions of Azerbaijan will gather together to demonstrate their abilities and share yummies with people.